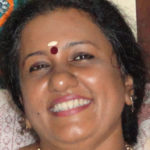 That particular day, on the 18th of July 2008, something different happened. Altogether everything was released from her heart; she felt all the knots just dissolving, and a blissful state arising from there.

The very effort to describe this renders it to deviate from the truth, still an effort is made to describe.

She just moved into her bed room, on the bed she sat with legs folded, with back straight, eyes closed, children were studying in the other room, they sensed that she was disturbed and they did not disturb her then. It was around 7.30 in the evening, and the lights were off in the room. Her attention went to a spot that’s slightly towards the right side and a bit lower to the centre of the chest region and a single thought prevailed there that “I am this one here (with no name and form – Atma) ”. It just happened that the last remnants of the mind was thrown off totally from her and then there was absolutely nothing that she had to think, as probably her system had foreseen that thinking would extinguish her, and then there spread a stillness. From that stillness, which happened on its own, arose a blissful state, she felt an unbearable joy, experienced never before, then felt as if she was weightless and felt as though floating. She could not feel the presence of her body, limitlessness and an expanse happened. Don’t know for how long she was lost in that state. From then on any minute she wished, she could enter that state of stillness, that very second. Peace was never disturbed! The first thought that came to her after she came out of that thoughtless state was “Oh! The whole world is in grief for no reason, if this simple secret is shared to all, everyone can come out of grief and be blissful”. The other thing observed was that there were no questions in her. A question-less state, and such clarity as though everything can be seen through a clean and clear glass!

That was the day when the transformation happened and the last thing still clinging to her heart was dropped! Everything else had gone and had been cleaned all along the process of living. There was just this last thing left and on that final day that too was dropped! She had reached the brim of that maturity level so as to have been blessed by the divine grace to be transformed. That was probably the last knot / entanglement remaining that was removed. From then on there has been an all liberated state. Nothing ever touches since then. Life totally changed though nothing changed! Though it was an overnight happening, it never was so! It was in fact a process that was taking place every second of her life and the completion was overnight. But for that overnight happening there could never have been this liberated state. Ever since there has only been a wondering state! An amazingly wonderful state!

Before this final change, there were a few mentionable happenings in her life.

It was in the month of Feb 2008, one night, that she happened to see her dead body in the marbled floor in the moonlight. The body, though decked up beautifully, was lying there dead and she asked herself, ‘Who is lying there?’.  There came a spontaneous correction in the question as ‘What is it?’ in place of ‘Who is this?’! A spontaneous answer too came ‘This is the food for worms!’.

Later in the months of April and May of 2008 Rajini transformed herself fully into the divine where Rajini was not allowed to be present at all. This was an inevitable process of her life, as Rajini was incapable of handling situations righteously, in those very very tough situations when her being righteous would mean her shattering into pieces, and the only way out for her to be righteous was by kicking her out and letting the inner divine function as for the divine nothing was impossible! This was intentionally and very religiously done every minute of her waking state, as her presence would, that very minute, shatter her into pieces. She in fact had no way out other than this, as she was not ready for any compromise on being righteous.

The easy way that was available to her was to shun righteousness and that would let her breath continue. But then all that is possible only if she, anywhere in some corner of her heart, found it agreeable to do that.

It was only after surviving this intense period, later in July 2008 on the 18th at about 7.30pm the final transformation or breaking off or the explosion happened!

All her life, she had the inclination to do the righteous, not just the inclination but also strength enough to hold on to the righteous. The situations kept on intensifying and she had to undergo very tough trial periods in her life, where she had to gather all her strength even under strangulating conditions to hold on to ‘what is righteous’ when just deviating away from righteousness would have solved all her problems. Holding on to her inner divine voice, the righteous, was not easy. It was akin to a tight rope walk between two high rise buildings and further it intensified into a razor edge walk as situations kept getting tougher and tougher! Holding on to one’s inner voice and doing what is righteous even under tough situations, where by being righteous you undergo death, is possible only if you have an unconditional love for the divine/inner voice!